Blog  /  Where to Eat in Bangkok, Thailand 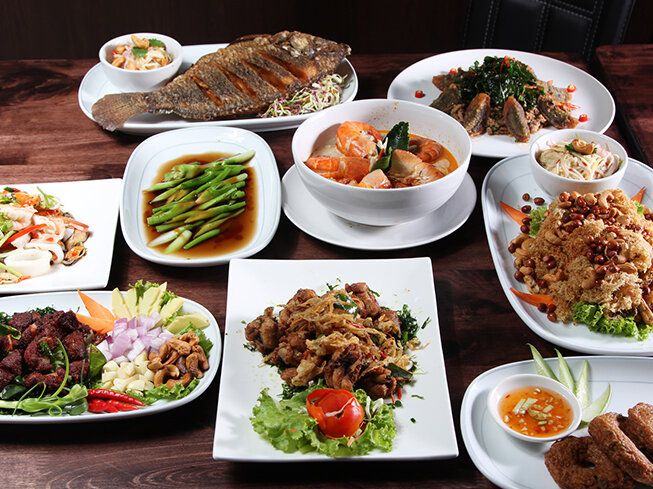 Where to Eat in Bangkok, Thailand

Bangkok is one of the premier cities for world-class cuisine. In addition to thousands of outstanding Thai restaurants from five-star to street stall, Bangkok features the entire spectrum of international cuisines, a byproduct of its cosmopolitan population. Expatriate Japanese, Indian, German, Italian, French, Lebanese, and people of nearly every other nationality have established authentic eateries throughout the city. Upscale food courts in many shopping plazas provide visitors with a wide selection of outstanding restaurants, and most hotels feature at least one Thai and one international dining establishment. An incipient food-tourism industry has even appeared on the scene; a testament to the outstanding variety and quality of cuisine available in Thailand’s capital city.

Khao San Road:
As one of the epicenters of tourist activity in Bangkok, Khao San Road features a great selection of food, from Thai street food to authentic Middle Eastern and western cuisine. While entrees in Thai restaurants along Khao San Road are hardly authentic -they tend to prepare their food with far less chili than most Thai restaurants do- menus are all in English and the prices are only moderately higher than in everyday Thai restaurants. On the street however, it’s possible to buy common Thai street food, such as fresh fruit, phad thai noodles, spring rolls, and various meats on a stick, all for under $1 US. For novices to Thai cuisine who are fearful for their stomachs, there are also chain branches of American fast food outlets Burger King, McDonalds and Subway, and for those with more refined palettes there are restaurants along nearby Phra Athit Road that serve authentic Thai cuisine to a predominately Thai student crowd.

Silom Road:
The Silom business district around Sala Daeng BTS station may be better known to visitors for the Patpong red-light district and its popular night market. However, Silom features an outstanding collection of Thai and international restaurants, both upscale and casual. In addition to many fine dining restaurants and moderately priced cafes, there are also many international chain restaurants and some of Bangkok’s best street-food dining venues, both on Silom and its side streets, particularly Soi Convent and Soi Sala Daeng.

China Town:
Yaowarat, Bangkok's Chinatown, is a one of the top dining neighborhoods in Bangkok, with a range of dining options from some of the cheapest food stalls, including fresh fruit vendors and roasted chestnuts stands, to some of the most expensive Chinese restaurants in the city. Along Yaowarat Road and the mazes of side streets leading away from it you will find dim sum, seafood, and many other Chinese eateries, particularly Cantonese dining establishments.
In nearby Pahurat, just west of Chinatown, there is a large, long-established Indian community that sells Indian cuisine at a number of authentic restaurants.